Three months ago I stood at the center of an NBA arena, sweating. Large men over 6’5″ stood on either side of me. A cameraman crouched on the ground, capturing my nervous face on the jumbo screen.

One thought in my head.

I pinched my arm, took a deep breath and started to sing.

The National Anthem is the toughest song in the world to perform. If you start too high, you end up blowing the crowd’s ear drums. You can easily go off pitch because it’s usually done a capella. And if you don’t know the words, you’ll end up on YouTube. For all the wrong reasons. 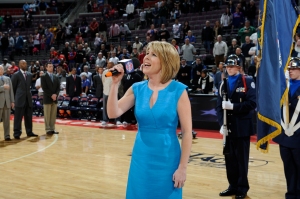 If I can remember the words... Xtina has no excuse

The nerves I had that night at the Detroit Pistons game were the worst I’d ever had. So I can only imagine what Christina Aguilera was feeling in front of a zillion fans world wide.

See, Christina gets paid to sing in front of crowds. She is a singer, a performer, an actress and a celebrity. Crowds are nothing new for her.

I, on the other hand, am a tv reporter, writer, mother of three and karaoke singer.

Christy = not my job

Which makes me think she didn’t really realize what she was singing at the Superbowl on Sunday night. It wasn’t “Beautiful” or “Fighter” or.. um, any of her other songs.

It was our national anthem, where the WORDS are the most important part of the song.

You better believe she had to work to remember all of the crazy runs she did in the song and various pitch changes so it didn’t sound anything like the melody. Why not spend just as much time nailing the words? Her rendition felt angry and lazy. Like all she needed to do was a few vocal gymnastics to wow the crowd.

Isn’t that what we learn on American Idol? That in order to be authentic performers we have to “feel the lyrics” ? Have I wasted too much time watching that show? Don’t answer that.

I doubt Christina will be asked to sing the anthem on a grand stage again. And I don’t think she should. She is vocally gifted, but she lost an opportunity to show the world that she isn’t the pop creation of some slick record label. Instead, by botching the words, she re-enforced every pop princess stereotype out there. If she made any cash off that performance, I hope she gives it to charity.

Thanks to Christina, I bet next year’s anthem will be pre recorded. And we’ll get a lip synched performance, but the words will be right.

Be respectful of the song, know the words and stick to the melody. You’re not Whitney. And get out of the way – because the crowd really wants to see the game.