“This BIKE!” my 7-year-old Caroline huffed. 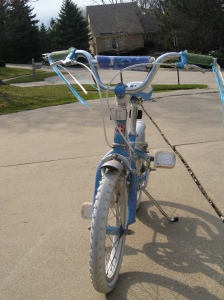 She pushed a mop of red curls from her eyes.

“I’m never going to get it!” she yelled miserably.

Yep, I’ll have to admit it.  On this sunny, crisp spring afternoon, I wasn’t too hopeful that she was EVER going to ride a two-wheeler.  Caroline has struggled to ride a bike for a few months.  We took the training wheels off near the end of last summer, but it never clicked.  She can pedal a few feet, and then she swerves and stops.

Ever explain how to ride a bike?  Um, not easy.  “Just kind of sit down, but pedal and don’t tip over.”  That doesn’t quite cut it.

We tried low seats, we tried high seats.  We thought about taking the pedals off.  My husband, Jamie, nearly took a header on the pavement, running along side of her.  I spent one evening running (in my flip flops – which I don’t recommend) and hanging on to the back of the bike.  She’d make some progress, but then would get scared and not want to try it for a while.

And I realized we would always try to hang onto the bike, until we sensed that she could go. We weren’t letting go.  We were part of the problem.  Ugh, a therapist would have a field day with this.

So I looked at Caroline.  “What’s the worst that will happen?” I asked her.  Then I echoed the question to myself.

She’ll fall, I said in my head.

“I could get hurt,” she frowned.

Yep, she could get hurt I inwardly cringed.

“You’ll take care of me,” she said simply.

Always, I thought.  But first I have to let you go.

She straddled the bike.  One foot on the pavement, the other propped on the highest pedal.

She wobbled, she weaved, she fought for control.  And it took everything in my being to stop myself from grabbing the bike and steadying her. But she started pedaling as fast as she could.  And she was gone, down the street.  Jamie sprinted along the grass, keeping a look out for cars.  Finally she put her brakes on, and flashed us the biggest smile in the world.

She did it! And for the moment, I was right there. Physically and mentally.  I wasn’t thinking about getting dinner started, returning emails, plotting potty training strategy or planning my next career move.  On that spring afternoon, I will remember her face, how the air smelled and a tremendous sense of accomplishment.  For her.  For me.  My eyes welled up.  Must have been those darn allergies.

“It’s easy,” Caroline said as she breezed by.

Of all the moments in life – career accolades, a wedding, births, babies sleeping through the night (trust me, biggest milestone ever), first steps, Kindergarten – this, I will never forget.

I let go, watched her take off.  And I was right there to see it.

15 thoughts on “Letting Go: Easy As Riding A Bike”