Kids shows can make me insane. I’m always slightly hostile to any show that my three kids adore, because:

b) I have to watch it over and over

c) I actually start to sing along. Curses.

First it was Baby Einstein: Genius. Why didn’t I think of sock puppets dancing disturbingly to classical music?

Curious George: Monkey who NEVER gets in trouble for doing seriously bad stuff.

Calliou: I know he’s four, but I hate that kid. 2-year-old sister Rosie is more mature than he is.

Sesame Street: Still the gold standard – plus they hilariously spoofed Mad Men and 24. With muppets. Who else can do that? 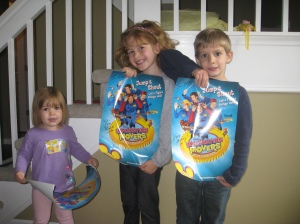 Then, the kids moved into Disney territory. The M-I-C-K-E-Y Mouse Clubhouse became an obsession along with a new show called the Imagination Movers. Four guys – Rich, Scott, Dave and Smitty – who kinda form a rock band but live in a warehouse (with a mouse), solve people’s problems and there’s a cute girl who lives upstairs. I think that’s it in a nutshell. They scored high in my book, because they got the kids engaged in problem solving. And they weren’t 50 years old trying to jump around and sing songs (see The Wiggles). Now, they’re also into Phineas & Ferb (my 2-year-old screeches “They’re making a title sequence!” when the show comes on). And we’re the proud owners of a talking Dr. Doofenschmirtz doll.  Don’t ask.

But there came a day when the Imagination Movers collided with my husband’s world. Jamie is a sports radio guy, and couldn’t resist when he found out one of the Detroit Pistons was going to be ON the Imagination Movers. So he did what any sports nerd – uh, anyone would do. Went to Twitter with the breaking news.

Jamie tweet: “Rip Hamilton is going to be on the Imagination Movers. I don’t know which is worse, Rip on the show, or me knowing that show exists.”

I blasted back something like, “Hopefully he wont be wearing woggle goggles”. Which, is the eyewear of choice for the Movers when they’re solving problems. Or something like that. (Again, I can’t remember what I learned in college, but apparently can list stupid details to kids shows.)

Well, apparently, Scott the Imagination Mover is on Twitter.

I love Scott the Mover

And my husband got an email from STM (Scott the Mover), gently chiding him for ragging on the show. And as an aside, said the Movers were sports fans too, so how could they be so bad?  Jamie, who has no fear of questioning athletes and sharing his sports opinion, now felt bad at taking shots at the IMs. I mean really, it is just a kids show. And a huge reminder that in the age of social media, we’re all only about 6 degrees of separation from Scott the Mover.

Scott (new best friend) and Jamie exchanged a few fun emails and a few weeks later, we got a package in the mail. Three autographed posters for each of the kids from the Movers. They now hang in their bedrooms. A classy move that made me fall in love with the Movers even more, and cut them some slack when one of their songs gets annoyingly stuck in my head.

After this blog goes out, I can only hope that Calliou isn’t on Twitter. I’d hate to make a 4-year-old cry (more than he already does). #whiner

11 thoughts on “Kids Shows, “Imagination Movers” and Twitter – Oh My”