You know you have thought it.  At least once.  Sitting at a table for ten, in formal clothes, drinking a watery Tom Collins, hoping for a good meal (or at least a plentiful bread basket) and it starts. 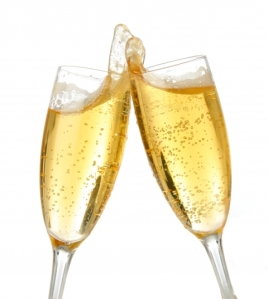 Here's to... a good wedding toast

At one point you inwardly cringe, squirm and mutter, “this toast makes me uncomfortable.”   (and I will remember in detail to tell my friends later)

I have always loved toasts, though, because I love people watching.  And nothing is more raw than making someone who is not used to public speaking address a crowd during an emotional occasion.  It could be used as some kind of CIA torture.  (It is the number one fear people have) But don’t get me wrong.  Not all toasts are bad.  I have been known to get a little weepy at toasts, (I also get weepy at babies and Extreme Home Makeover)  because the sentiment was sweet and you could tell there was thought and true emotion behind it.

Like one wedding where a toast started, ten minutes into it I went to the ladies room, five minutes later I came back and it was still going on.  For a grand total of 23 minutes.  At another wedding, the groom hijacked the toasting mic, and then spoke for close to a half hour about a crazy road trip he and a friend took once.  Never mentioned the bride.  Another favorite toast I witnessed, was an angry bridesmaid who took veiled shots at the bride’s ex-boyfriend.  Who was in attendance. At my table.

It’s been easy for me to be a toast critic because, well, I’ve never had to give a toast at a wedding. Been a bridesmaid many times, but have never given THE toast.

But that has all changed.

The last of four McDonald sisters is finally getting married.  My little sister Kathleen has excitedly chosen all of her (old) sisters to stand up for her.  (You should have seen us figure out what dress and shoes to wear.  A blog in itself)   And I was honored when she asked me to give the toast.  Between the four of us, it’s all kind of worked out, toast wise.  When Patrice got married, Cara gave a toast.  When I got married, both Patrice and Cara gave toasts.  When Cara got married, Kathleen gave a toast.  Now, I’m on deck. And coming from a family of writers, occasional over-reactors and opinion-givers, I figure I’d get some good pointers.  But the McDonald clan has been strangely advice-free on the toast.

Except for the Father of the Bride, aka “The Checkbook”( as he refers to himself at this point in the wedding process).  “Keep it to the point,” he reminded me. He is a career PR guy, after all.

Bottom line: It’s not about me.  It’s about the bride and groom. And the more I remember that, the better the toast will turn out.

But secretly I am petrified that I will become a toast “don’t”.  And someone will call their friend that night and say, “You’ll never guess WHAT happened!  This old bridesmaid got all weepy and forgot what she was saying!  And she spoke for forty minutes!”

Me and the bride

So… bonus question:  What was the worst wedding toast you ever experienced?

14 thoughts on “Your Wedding Toast Makes Me Uncomfortable”