On a trip to the basement yesterday, I caught the eye of Thomas the Train.  He still had that goofy, wide-eyed look on his face, but I could tell he was putting up a brave front.  He was laying on his side in a plastic bin, pinned by a wooden track and surrounded by his friends. You know, Percy, Henry, Gordon, Bertie the Bus and many others whose names I just cannot remember.  They were crowded together with 80 feet of track, a roundhouse, railroad signals and a few fake trees.  Usually Thomas and friends are spread out in the play area, ready for another adventure my 5-year-old son Josh has created for them. 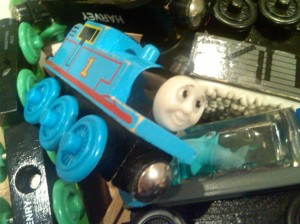 Thomas the Train in the bin

But last week, I asked Josh to pack up Thomas and move him for his sister’s birthday party.  That was a week ago.  As I looked at Thomas the Train’s cheeky little face, frozen in the bin, I realized that he may not be coming back out.  I think he knew it too.

Thomas was an obsession for Josh starting at age three.   He built new tracks every day.  And when I say tracks, I mean intricate, multilevel rail systems with switches and bridges that ran the length of our basement.  For hours, he would lay the side of his head on the carpet, in a bizarre little crouch, so he could be eye level with Thomas as he chugged along.  Each addition to the crew was major excitement.  Aquarium cars, happy birthday party cars.  We even got Troublesome Trucks that laughed.  Evil, creepy laughing, but Josh loved them.

He sported a red Thomas the Train sweatshirt and begged Santa for a “squishy Thomas”.  We didn’t know what that was, until we saw a stuffed, plush Thomas the Train at Target.  Santa put one under the tree that year.  We even took Josh to ride the life-sized Thomas the Train when it rolled into Greenfield Village.  It was a forty degree day in May with a cold drizzle.  Miserable.  And it was NOT cheap.  (Memo to the Thomas the train people: have mercy on parents that have already gone broke buying all your stuff.)  Josh loved it.

I grumbled about Thomas.  I couldn’t stand the show, the bizarre movies and books.  They were kind of weird and sometimes made no sense.  My sister claimed she could write a paper comparing Thomas and his friends at the railway to a dysfunctional, modern workplace environment.  (This is also the sister who wrote an entire paper on how “Beverly Hills 90210” reenforced bad gender stereotypes)

But things changed in the last few months. Talk on the kindergarten playground turned to “Star Wars” and Legos.  And “Star Wars Legos”.  Josh would still play with Thomas a little, but his new Lego police station got most of the attention.

The other day Josh had a friend over to play and I told him to pick up his room before his friend came.  I walked in for inspection and noticed something missing.  Squishy Thomas wasn’t sitting on the bed, like he usually does.

“Oh,” said Josh.  “He’s here.”  And he opened his closet to show Squishy Thomas on a

It makes me so sad.  I know he’s getting older and I know he has to move on.  But Thomas marked a big part of our lives. So many times over the past few years, I have wished for my kids to grow up (to at least go to the bathroom by themselves).  I would say  “I can’t wait until they’re old enough..”

Now I find myself saying, “Just a little bit longer”.

There’s a reason why the Toy Story movies made adults cry – the nostalgia for loving a toy so much, the idea that perhaps a toy could love in return, and inevitability that we’ll outgrow them.  I feel bad for ‘ol Thomas in the basement.  He gave Josh years of entertainment and an outlet for his creativity.  Now, he may be done.

As I walked up from the basement and to the bedrooms, I stopped at Josh’s door to look in.  It was a Lego explosion, with small police cars and pieces scattered about.  Luke Skywalker and Darth Vader figurines duked it out in a corner near a fleet of racing cars.

And sitting on the bed, was Squishy Thomas.  Back in his familiar spot.

19 thoughts on “Thomas the Train Toots No More”