It’s my own fault. I admit it. The picture looked really easy when a woman I worked with last fall showed me.

“My grandkids loooove the Minions from “Despicable Me,” she cooed. “So I made these cupcakes and they are so cute and fun!”

When I showed my three kids, who are Minion lovers, the picture of impish yellow heads sitting on blue frosted cupcakes, they went nuts.

“Will you make these for my birthday?” begged my son Josh.
“Sure! I can make those.” I boasted, pretty confident that he’d forget about the cupcakes when his birthday rolled around seven months later.

Like many of my parenting assumptions, I was wrong. Josh, the king of remembering random sports stats, never forgot about those cupcakes. A month before his birthday, Josh came to me and said it was time to plan his birthday party. I froze.

He’s only had one party, when he turned six. Eight boys came over to our house. One fell in a puddle, a glass broke, one screamed “cheater” during touch football, and another wanted to go home. That was in the first fifteen minutes. As one of four girls, I looked over at my husband and shakily asked, “So, is this what boys do?” He nodded slowly.

So I’ve sworn off boy birthday parties. Terrible, I know.

“Well, if I’m not having a party,” Josh says. “Can you make those Minion cupcakes for my class?”

What?! He remembered. But really, how hard can they be? 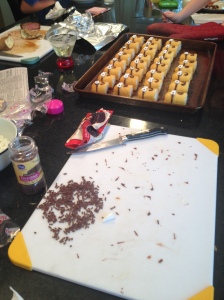 Two boxes of Twinkies, a massive bag of Smarties (sorting through each roll for the white ones), tube of icing, sprinkles, two boxes of cake mix and two cans of electric blue frosting later, I was on my way to a Pintrest nightmare.   Even the check out lady at Kroger looked uneasily at my cart, as if to say “Do you really need all those Twinkies, lady?”

That Saturday night (yes, this is what Saturday night has become) I was parked at the kitchen counter, smearing on eyeballs and poking sprinkles on top of little Minion heads.  Thanks to a strong gimlet, some of the smiles are a little crooked.  Word to the baking wise, never drink and decorate.

When I finally sat those babies on top of the blue frosted cupcakes, my kids crowded around like they were looking at the eighth wonder of the world.   The builders of the pyramids had nothing on me.

“These are the best treats ever!” Josh yelled gleefully.

Crooked and crazy looking, they were.  And categorized as a “Never Again” project.  Why do we do this to ourselves? These half Twinkie, smartie-eyed, blue frosting smeared messes symbolized a mother’s guilt.  Perhaps some store-bought cookies could symbolize my no-birthday-party-guilt next year.  It would save me some serious time to feel mother guilt about something else.

The report from school was a thumbs-up from the second grade class.  Not a picky crowd, I’m sure just blue frosting out of the can would have been a hit.  But the birthday boy was pretty happy and I guess I’m a sucker for his sweet smile.

“So good, Mom!” Josh said as he ran down the hall, bumped into a wall, yelled ‘whoo hoo’ and pretended he was hitting a baseball.

On second thought, Minion cupcakes instead of eight boys doing that in my house?  Hmmm.. 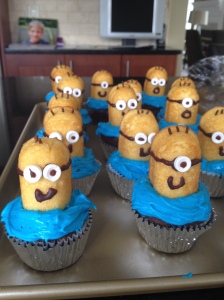