My 5-year-old was decked out in a blue and red uniform and cleats, hopping from one foot to the other.

“I’m so excited for soccer!” she yelled.

“What are you most excited about?” I asked.

SNACK. I hear the word “SNACK” at least 80 times a day. Apparently children can’t go an hour and a half without eating something. Even the word “snack” has taken on a life of its own. It’s not even “A snack” or “THE snack”. It’s like the term “prom”. You’re not going to “The Prom.” You’re going to prom. (And I’m sure they’ll have lots of snacks there) 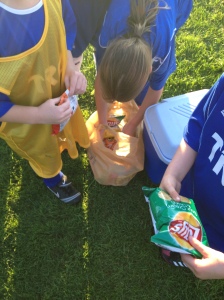 You have to pack snack for school. You get snack after school. There must be snack at Girl Scout meetings, soccer and baseball games and Sunday school.   At the 5-year-old’s soccer games, there are TWO snacks. One for half-time, and then one for AFTER the game. Oh, and make sure you have enough for every player’s siblings who are hanging around at the game. And don’t even think about dodging the snack sign up. The parents in charge of snack patrol will track down and give you snack duty. One friend tried to start the “Ban Snack” movement last year at our oldest daughter’s soccer games. Didn’t work.

Snack happens any time there’s an event. If your soccer game is at 9am, your kid will be eating Chips Ahoy in a snack pack by 10am. Dinner at 6pm? Better hope your child doesn’t have a 4:30pm kick off – otherwise their appetizer will be Cheetos and Sunny D. Eat a light breakfast on Sundays, because church class is sure to pass out the donuts during the hour-long class by 10:30am.

Yes, the note goes home in the beginning of the year, advising that the snacks should be “healthy”. Not sure what foods fall into that category anymore. Everyone seems to have their own interpretation. Potato chips and Cheez-Its seem to be the most popular at games. But too many times have I seen 7-year-olds in a snack scrum with Nutter Butters and Oreos.

I end up being the snack killjoy, because I bring granola bars. Nope, not the chocolate-chip-drizzled-with-dark-chocolate-stuffed-with-cashews-granola bars. I get the regular hard oat ones that come 2 to a package. They break teeth. Word gets out among the kids. They know whose parents give good snack. Let’s just say no one is clamoring for Mrs. Samuelsen (my married name) to bring the goods. Hey, I got edgy and brought Sun Chips once.

As for school snacks, it’s usually Goldfish crackers because I have no idea when they eat these snacks, and if they are really hungry. In preschool last year, my daughter had TWO snacks. They got to school at 9am and were snacking by 9:45am. Seriously.   Many times half eaten snack comes home, crushed in the bottom of the backpack. 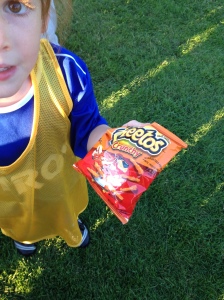 Maybe I’m just lazy.  I hate packing something extra – I already loathe making lunches.  No, no I don’t want the children to starve. Yes, it’s a long (insert activity here) school day, Sunday school session, game etc. No, I won’t tell you that “Back in my day….” And of course I could forbid my child not to touch the tantalizing snack that everyone else is chomping on.

Sigh.  But I’m sick of snack.  Children everywhere, though, seem to love it.  And I’m sure Costco does, too.  It’s the only place you can buy 36 granola bars in one handy granola bar box/carrier.

Oh – and the little one’s soccer snack?  Let’s just say it took hard scrubbing to get the orange off her fingers.

1 thought on “The Attack On Snack”