I’m clearing out my pots and pans, grabbing the ‘ol Betty Crocker cookbook and moving to someone else’s kitchen.

I have to prod them to eat a few bites of baked chicken. Argue to eat rice. I can’t even cook a vegetable; they all have to be raw. They won’t eat sauce on pasta (Really? What’s the point?) Oh, I’ve read “Parents” magazine. I know the old “put fruit on skewers like it’s fun!” routine. I’ve done it. I’ve rolled fish in corn flakes for a homemade version of fish sticks. I’ve made ketchup available as a dipping sauce for everything. Doesn’t work.

We end up in the same eating routine week after week. Chicken. Plain pasta. Maybe fish (w/ lemon and a side of threats) Tacos. Baked macaroni and cheese (they even refuse to eat the Kraft mac)

So who gets punished? Me (and my husband, he’d like to point out).  We have to endure eating the same thing over and over again because a) I think it’s important to eat as a family b) I don’t want to be a short order cook and fix something different for everyone.

When they were babies they were great eaters, fruits, veggies, fish you name it. I smugly rejoiced at my flexible, plump babies that ate it all. Then they had a processed fish stick, their taste buds turned to the dark side and I found meal planning each week to be an excruciating game of “Who will eat it?” 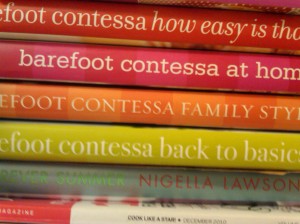 The thing is, I love to cook. I want to cook. I have SIX BURNERS on my stove. I long for creamy risotto, buttery scallops, sweet potato fries, lentils and roasted broccoli. I worship at the recipe altar of Ina Garten (or maybe I just want to hang in the Hamptons and make Jeffrey’s favorite chicken) and like to experiment with interesting flavors and lots of butter. I’m trying to out do Martha by taking on her cookie book (don’t do the gingersnap palmiers, terrible recipe) and I aspire to make my own ricotta cheese.

But the pleasure of cooking has turned into an unhappy chore. Last night I made chicken cordon bleu. What’s not to like about chicken with ham and cheese wrapped up inside? Nobody liked it. My son said to me, “If I eat another piece of this, can I have dessert?”

So kids, you’re on your own. Find some other lady to fix your meals. I’ll be the one eating risotto in the corner. By myself.

Welcome to Christy McDonald's blog! Christy is the mother of 3, an Emmy award winning TV anchor/reporter for Detroit's PBS and married to sports guy Jamie Samuelsen. Her blog is a mash up of pop culture and parenting - Enjoy!